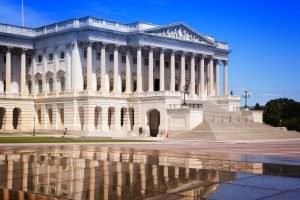 The 115th Congress reconvened on Tuesday after the summer recess, and will have to hit the ground running if they are going to accomplish all items on the agenda, according to the National Association of Federally-Insured Credit Unions.

The end of September brings a number of deadlines: first, funding for the fiscal year, which begins in October, needs to be approved. With that, the debt ceiling will need to be raised in order to allow the Treasury Department to borrow money for Hurricane Harvey relief. Although it is not yet drafted, Treasury Secretary Steve Mnuchin said in a recent interview that he would like to see legislation for hurricane relief funds be tied to an increase in the debt ceiling. The Nation Flood Insurance Program will also need to be reauthorized before September’s close.
There has been talk of the Senate invoking the Congressional Review Act to remove the Consumer Financial Protection Bureau’s arbitration clause, which allows consumers to file class action lawsuits, although no action has been taken.

Various committees will also gather for hearings that could have implications for the mortgage and finance industries. The House Financial Services Subcommittee on Capital Markets, Securities, and Investments will meet to discuss the oversight of the financial industry’s regulatory authority, and the House Financial Services Subcommittee on Financial Institutions and Consumer credit will review proposals for “a more efficient federal financial regulatory regime.”

Confirmations hearings will also be taking place: the Senate Banking Committee will vote on Joseph Otting, President Trump’s nominee to be Comptroller of the Currency, and Randal Quarles, the president’s nominee as Federal Reserve governor. Pam Patenaude, who was nominated to be the U.S. Department of Housing and Urban Development’s Deputy Secretary in June, is still waiting on a vote.

About Author: Joey Pizzolato
Joey Pizzolato is the Online Editor of DS News and MReport. He is a graduate of Spalding University, where he holds a holds an MFA in Writing as well as DePaul University, where he received a B.A. in English. His fiction and nonfiction have been published in a variety of print and online journals and magazines. To contact Pizzolato, email joseph.pizzolato@thefivestar.com.